Due to circumstances surrounding the reaction to White Hats Report #38, this could be one of the most anticipated releases we have ever done to date. 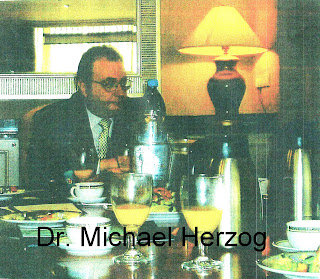 The man pictured to the left is Dr. Michael Herzog, Berlin, Germany.  To make it clear the Michael Herzog pictured to the left is the portfolio manager of the Davidson Kempner Euro Investment Fund.  This again is the same man who assisted Bush Senior, Jeb Bush, Bush Junior, Mitt Romney and other co-conspirators in stealing funds from Edward Falcone and has been involved in other criminal activities.

Report #38 was released on the evening of Monday, March 26th.  By 5:00 AM EST the next morning, the UK office of Davidson Kempner was aware of the report. Between  approximately 5:00 AM and 10:42 AM EST on Tuesday, March 27, the UK office of Davidson Kempner had hit our website a total of 50 times, culminating with 8 of their screens viewing the report all at the same time.  This was an indication to us that we had squarely hit the target.  A second indication was a notification to us by their UK law firm, Schillings Co.

Subsequently, we began receiving emails from other websites that had posted our report, informing us they had been contacted by UK law firm Schillings Co., warning them that our report was in error.  Later Tuesday night, Wednesday morning UK time, we received an email from Schillings Co. informing us that this was a case of mistaken identity, and that the con man and crook Michael Herzog referred to in WHR #38, was not the same Michael Herzog in Davidson Kempner’s employ.  Obviously, both Schillings Co. and Davidson Kempner were aware of the Michael Herzog we’ve been reporting on and indicated that they wished us to retract and correct our report.

After some discussion, we decided to pull the report and inform our readers of the situation.  We had several alternatives to this tactic but wished to contemplate our response so as to maximize effect.  Over the course of the following 10 days, we received 4 emails from Schillings Co. asking us to post a retraction and correct the “misinformation” we had offered in Report #38.  In their last email dated Wednesday, April 4, they suggested the following:

“Dear Sirs
Following on from our previous email, please confirm that you have concluded from your investigations that this matter was simply a case of mistaken identity and that as a result you will publish a mutually agreeable retraction of the information to conclude this matter.

Please provide us with the wording you intend to use so that we can agree a final version of this retraction.

Clink on the link for full email correspondence:  http://www.scribd.com/doc/88423348/Davidson-Kempner-Lawyer-Emails

So not only did they want to coerce a retraction, they wanted to approve the wording as well.  At no time did they ever threaten to file a lawsuit, which was an indication to us that they were acting out of weakness.

Over the last several weeks Herzog has been working to cover up his activities by taking down his internet video report in which he presented economic and investment data that revealed his involvement with Davidson Kempner.  His site was taken down and removed about a week before we released Report #38.  There are also indications that Herzog may have become aware of the content of Report #38 before it was posted and took these actions as a defense.

WE KNEW WE HAD THE RIGHT MICHAEL HERZOG FROM THE BEGINNING AND SO DID DAVIDSON KEMPNER.

While digging deeper into this continuing web of deceit, we discovered that not only did Mitt Romney introduce Dr. Michael Herzog to the Davidson Kempner Group, but it has now been discovered that Mitt Romney and Jeb Bush arranged for 10 Billion Dollars to be invested in the Davidson Kempner Euro Fund, thus making it the company’s largest investment, with Romney and Jeb Bush as beneficiaries.  Now, who do you think Romney’s VP nominee will be?  Where did these funds come from?  Fortunately, our investigation will continue into this Davidson Kempner Euro Fund and also, since Davidson Kempner is an SEC reporting company, we will be reviewing their records to see if they followed the Patriot Act and all appropriate legal requirements.

So now we can add Davidson Kempner Capital Management Fund, LLC and the UK law firm of Schillings Co. to the long list of dark cabal enablers.  Schillings Co. admitted to our representatives in the UK they were just “doing what we were told”.  It shouldn’t be surprising that morals and ethics are not part of the equation when you’re being used as the dark cabal’s tool, carrying out their intimidation, deception and bullying tactics.

Davidson Kempner Capital Management Fund, LLC apparently felt our exposure of Herzog warranted attention of one of their Senior Partners in New York  who flew to London to personally oversee and manage the attempt to bully, intimidate and coerce the White Hats.  The question now is, will he remain in London to oversee and manage damage control from the blowback of a misdirected cover up effort?

We also wish to note here that the UK law firm, Schillings Co., was working for, at the behest of and being paid and directed by Davidson Kempner Capital Management Fund, LLC and NOT Michael Herzog.

At the time of this writing, legal remedies are being contemplated and pursued by both Edward Falcone and the White Hats against Davidson Kempner Capital Management Fund, LLC and the Shillings Co. law firm.  We anticipate a negotiated apology from both Shillings Co. and Davidson Kempner for their attempts to bully the White Hats and hide the truth.  Further, we want the multitude of websites who post our reports to know that we use extreme diligence and care with distributing the information and would not, in any way, jeopardize them by releasing undocumented facts in a public forum.

Let this be a clear warning that not only do the White Hats stand firmly behind everything that we report but we will also vigorously defend every fact.  Unlike the mainstream media, which is in the pocket of the dark cabal, we take great care and diligence in reporting facts which have supporting evidence and documentation.  We take our responsibility very seriously and will not in any way, shape or form mislead our readers and supporters by releasing information that is not confirmable, reliable and factual.

To our readers…..we extend our thanks for your patience and continued support as we formed our response to this ill-advised challenge of verifiable facts.  We take great responsibility in everything we report and it is our hope that our releases will continue to be spread far and wide as the truth shall not be silenced.

Not in our time and not on our watch.

There will be more to come on this subject matter soon.

To our readers, Report #38 is back up for continued mailing to Davidson Kempner Management and the SEC.
http://tdarkcabal.blogspot.com/2012/03/march-26-2012-white-hats-report-38.html

Posted by The White Hat Reporters at 12:32 AM

“The Matrix is a system, Neo. That system is our enemy. But when you’re inside, you look around, what do you see? Businessmen, teachers, lawyers, carpenters. The very minds of the people we are trying to save. But until we do, these people are still a part of that system and that makes them our enemy. You have to understand, most of these people are not ready to be unplugged. And many of them are so inured, so hopelessly dependent on the system, that they will fight to protect it…”

One World of Nations